NanoKnife uses Irreversible electroporation (IRE), a promising new minimally invasive modality for the ablation of solid tumours. Unlike the current leading thermal ablation modalities, such as radiofrequency ablation (RFA) and cryoablation, IRE uses nonthermal electric energy to irreversibly destabilise cell membranes, resulting in focused cell death – apoptosis. Over the past 11 years, IRE has been emerging as a novel ablation tool by using the effect of an applied electric field to kill cancer cells, without damaging the surrounding extracellular matrix, vessels, nerves, and neighbouring normal tissue.

What is Irreversible Electroporation (IRE)?

IRE is a technique which uses strong electrical fields to produce microsecond electric pulses, that create nano-sized pores in the cell’s membrane, which disrupts the intracellular and extracellular balance, thus inducing tumour apoptosis.

1. A direct current generator creates microsecond pulses of high voltage electric current that travel into the cell via surgically inserted electrode probes, to create irreversible pores in the cell membrane of the targeted tissue.
2. When the applied voltage is above a certain threshold the cells are unable to repair and seal the newly created pores to restore homeostasis and the result is cell death.
3. IRE is novel in that it does not use thermal energy, but electrical energy to produce focused cell death while sparing the normal extracellular matrix, nearby vessels, and structures, while allowing for rapid normal tissue regrowth.

1. Uses Non-thermal ablation – thermal ablation techniques create necrosis rather than apoptosis of the cell, which results in a number of undesirable associated issues including inflammation, immunoreaction, fibrosis and scarring of cell remnants. IRE does not use heat to ablate cells so these issues are avoided.

2. No “heat sink effect” – Heat sink is the cooling effect from blood flow that often hinders the optimal outcome of thermal ablation techniques such as RFA. It can result in incomplete ablation is highly vascular tumours or those close to the larger blood vessels.

Not impacted by ‘heat sink’, IRE has the potential to completely ablate tumours up to – and in contact with – the vessels without losing heat or cold via blood flow, as seen in RFA and cryoablation, respectively. This also means that IRE can ablate peri-vascular tumours such as a large hepatocellular carcinoma (HCC) around the portal vein or hepatic vein, which were considered ‘nonablatable’ by RFA in the past.

3. Clear evidence of cell death – IRE induces apoptosis within seconds resulting in a well-demarcated region of ablation, with a sharp boundary between the treated and untreated areas. Studies show that apoptotic cells are promptly removed by immune cell-derived phagocytosis and replaced by innate cellular regeneration, unlike the scar tissue that typically results from thermal ablation methods.

5. Minimally invasive & short procedure time – The overall time for the IRE treatment procedure is extremely short, lasting minutes as ablation typically requires 90–100 pulses, corresponding to the same number of heartbeats because IRE is coupled to the cardiac rate.

Why does NanoKnife not cause irreversible injury to blood vessels, bile ducts, and nerves?

Key to IRE’s effectiveness is its ability to create permanent pores in the targeted cell membranes. The electrical energy pulses generated disrupt the lipid bilayer structure of this crucial membrane which the cells cannot repair. The cells lose their ability to maintain homeostasis and as a result commit suicide.

Surrounding extracellular tissues are left fairly unharmed due to their higher collagenous connective tissue and the fact that their elastic fibre contents lack a normal cellular membrane where IRE can create pores. As IRE only works on the cell membrane, it does not destroy other types of substances in the tissue structure, thus maintaining the basic structure of blood vessels, bile ducts and nerves, and importantly minimising any damage that may be caused by the procedure.  Specific to neural tissue, studies demonstrated that nerves exposed to IRE were shown to maintain intact endoneurium and perineurium architecture, with Schwann cell proliferation, in contrast to nerves exposed to RFA which demonstrate coagulative necrosis. These findings suggest that nerves treated with IRE retain a potential for regeneration that is not present in nerves exposed to RFA.

In conclusion, IRE is a novel minimally invasive tumour/tissue ablation technique with several recognised advantages: (1) preservation of surrounding vital structures such as vessels; (2) not affected by the heat-sink effect; (3) apoptotic, nonnecrotic, cell death with a quick tissue regeneration; (4) a shorter procedure time; and (5) able to perform under real-time monitoring. 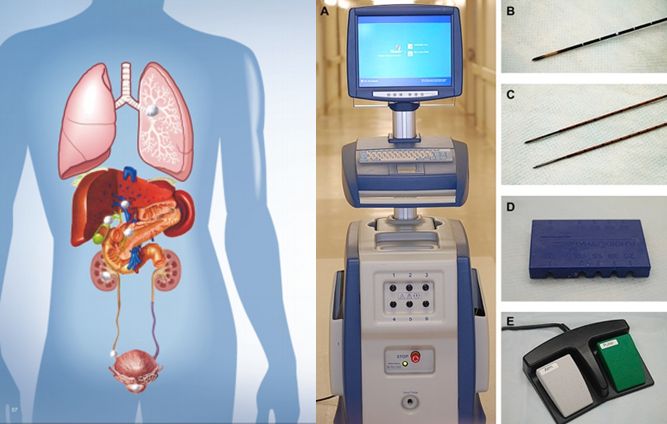 The history of IRE ablation research and development is still at its infancy but it is a promising technique that has many advantages over its predecessors and is producing impressive outcomes in patients around the world. Research and studies are ongoing and are absolutely crucial to further understand and optimise this technique to improve clinical outcomes and safety.