Radiofrequency ablation (RFA) is a treatment that uses imaging guidance to place a needle electrode through the skin into a tumor. High-frequency electrical currents are passed through the electrode, creating heat that destroys the cancer cells. RFA is an effective treatment option for patients who might have difficulty with surgery or those whose tumors are less than one and a half inches in diameter. The success rate for completely eliminating small liver tumors is greater than 85 percent.

What is Radio Frequency Ablation (RFA):

Radiofrequency ablation, sometimes referred to as RFA, is a minimally invasive treatment for cancer. It is an image-guided technique that uses heat to destroy cancer cells.

In radiofrequency ablation, imaging techniques such as ultrasound, computed tomography (CT) or magnetic resonance imaging (MRI) are used to help guide a needle electrode into a cancerous tumor. High-frequency electrical currents are then passed through the electrode to ground pads placed on the body, creating focal heat that destroys the cancer cells surrounding the electrode.

Microwave ablation, also a minimally-invasive cancer treatment, also uses ultrasound, computed tomography (CT) or magnetic resonance imaging (MRI) to guide placement of a specialized needle-like probe into a tumor and uses microwaves to heat and destroy it. Microwave ablation is used for the same indications as for RFA. The procedure is typically performed on an outpatient basis or with overnight observation in the hospital with general anesthesia. Microwave ablation has advantages over radiofrequency ablation (RFA), including the ability to treat tumors that are larger and those that are close to major arteries and veins. It can also be used to treat multiple tumors simultaneously. For the patient, microwave ablation offers minimal risk, typically little or no pain and a short hospital stay. The procedure can be repeated if new cancer appears.

Microwave ablation is effective in overcoming the cooling effects of blood flow in the liver, which allows for larger ablation zones than RFA and other heat-based ablation methods. 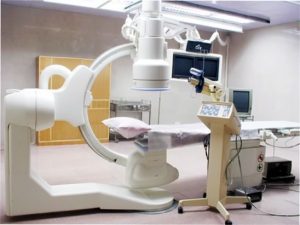 After detection of a cancer cell, a needle-like RFA probe is placed inside the tumor through skin and malignant cell is ablated or removed completely. Prior to treatment with RFA, a general anesthetic or a sedative is administered and treatment is completed with a CT or an ultrasound scan. This treatment can be carried out even during surgery or Laparoscopy. For large or multiple tumors in your body, several RFA probes can be used with variable heat.The Radio Frequency Ablation process lasts for around 30 minutes.

Who can Support RFA:

The Radio Frequency Ablation is suitable for patients affected with both primary and secondary or metastases cancers. RFA is recommended when a patient can not go through surgery due to difficult positioning of tumor such as near major blood vessel or the patient is not comfortable with general anesthetic .

Side Effects of RFA:

The RFA has negligible side effects compared to other treatment methods. A patient may feel a little discomfort or mild pain during treatment and slightly unwell with high temperature for few days. A patient can stay in hospital overnight and can be treated as an outpatient and go home the same day.

At SPDT 4 LIFE, we have  state of the art medical equipment and a team of Professionals dedicated to offering the best Possible Radio Frequency Ablation treatment for optimal results.